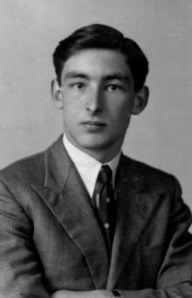 The experiences of a boy growing up in 1920s and 1930s Crosspool have been published in a personal memoir.

Joe Scott was born in Sheffield in November 1921. At the age of four in 1925 he moved with his family, including brother Willie and sister Mary, into a new house on Watt Lane in Crosspool.

The extracts below, penned in Joe’s retirement, give an insight into their Crosspool house, the neighbourhood, schools, cars and church. You’ll also read how Joe’s mother gave their address as Ranmoor rather than Crosspool because it sounded posher!

Thanks to Joe’s son Mike for giving permission for us to publish extracts of his father’s memoirs on this website.

Growing up on Watt Lane, Sheffield by Joe Scott

The house on Watt Lane, Crosspool 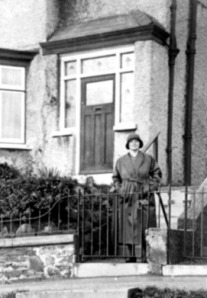 Ma at the front gate of our Watt Lane house, circa 1935

The house was a three-bedroomed semi, one of the many thousand built in the years between the wars. It cost £700 (probably about three years of dad’s salary), and they bought it with a loan from the Teacher’s Provident Society, and had paid it off by, I think, 1939.

I expect they moved because they needed room for three kids, and also because Crosspool was a desirable area on the western side of Sheffield away from the smoky industrial east.

Their friends the Pryors lived in Crosspool and probably told them of the new houses going up along Watt Lane. The sitting room and front bedroom had a fine view south across the valley, and there was a garden and behind it fields where children could play, with three trees where we had a swing, and a pond where we splashed and got muddy.

In the kitchen was a black cast-iron stove with a back boiler, which heated a limited amount of water. Pipes rumbled and gurgled as the water rose to the cylinder in the bathroom “hot press”, and you could get a moderate bath if you waited long enough. Little children were of course bathed together or consecutively in the same water.

There were fireplaces in the sitting room, the dining room and two of the bedrooms, but Mary’s tiny bedroom over the kitchen had none, so on Christmas Eve, when Father Christmas came down the chimney, Mary, Willie and I slept all three in the bed Willie and I usually shared. 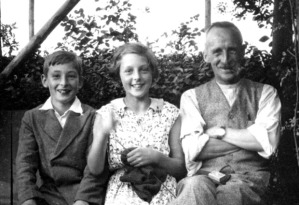 Mum and dad’s bedroom had a gas fire, but the other bedroom fire was never lit, and the house was bitterly cold in winter. There was an island of warmth within range of whichever fire was lit. But on winter nights the moonlight glistened on the ice that formed inside the bedroom windows as our breath froze.

There was, of course, electric lighting and there were three two-pin power sockets and mum ran an electric iron from an adapter on the kitchen light. Electricity was cheap (3/8d a unit) and as the 20s moved into the 30s we acquired more and more devices, an Electrolux carpet cleaner, a fire, an electric kettle, an immersion heater, a cooker with oven and hob, and even a washing machine.

On Mondays Mrs Smith came (from Pitsmoor for 5/-? plus her bus fare) to help mum with the washing. Until we got the machine (1935?) clothes were boiled in a gas boiler that normally lived under the draining board, and then scrubbed on a zinc board and swished around with a wooden “dolly” in a dolly tub. Small children, like “wee Joe” could be popped into the warm dolly tub for an unexpected bath! Mum also employed a “day girl” aged 14 or so, who came every morning to help, and was paid 5/- a week or so.

Things to do outside

There was always plenty for us to do, or so it seems in retrospect. We played hide-and-seek in the fields, and in and around the new houses being built. At the pond we tried to sail toy boats and from the clay made “touch-wood burners”. These were roughly shaped bowls of clay with holes in the side. You filled them with dry crumbling wood from a hole in one of the trees, and with luck you could get it to burn merrily in the wind.

In the winter we went snowballing and sledging. We rolled big snowballs in the field and made snowmen. We had only one sledge but it was big enough to hold all three of us. The best sledging was down Darwin Lane, which ran steeply from Watt Lane to Ranmoor, and saw very little motor traffic especially when there was snow. When conditions were right there would be dozens of children speeding down and trudging up. On one occasion council workmen appeared with a horse and cart to spread grit – to be met with snowballs!

As a family we often went on walks. There were routine and boring walks “round the lump”, but as we got older we went further afield, some- times taking the bus to Rivelin Dams and then walking round the “sandy track”, or carrying a picnic to Lodge Moor and following what was said to be a Roman road (it wasn’t) to Stanedge Pole.

Mary and I jointly owned a fairy cycle, a nasty little kid’s bike with solid tyres, which was never any use. Then aged about ten, I bought for 7/6 (from Ralph Warrender who lived a few doors away) a real bike of middling size. When I was 13 Willie passed on his full-size bike to me, and I used it to ride to school and with school friends as far as Matlock or Castleton. We were lucky to have the Peak District on our doorstep.

Rich and poor and going to school

Our house was nearly at the end of Watt Lane, where it joined Whitworth Road. Here and on similar roads stretching down to Ranmoor Church dwelt an altogether posher sort of people than those in our new semis. Stone-built, mostly in late Victorian times, these houses had room for living-in servants and stood in large gardens with trees and high walls.

We knew hardly any of the people who lived in them, but saw some when they went past in their cars, and others at church. We went to Ranmoor Church, and mum gave our address as Ranmoor rather than Crosspool because it sounded posher. In the church the seats near the centre aisle were “private” – each bore the name of a family in one of the posh houses. We sat at the side in seats marked “free”– so learning our place in the class system.

At the other end of Watt Lane was Crosspool with a few shops and beyond that Lydgate Lane which led into Crookes. Here were terraced streets of working class houses, also of Victorian vintage. Lydgate Lane Council School was the nearest for us, and Willie and Mary went there when we first moved to Watt Lane.

But it served the Crookes area as well as Crosspool, and when there were stories of “rough boys” from Crookes, mum and dad looked instead at Nether Green Council School, which was further away but not so “rough”. Dad would know the reputation of both schools, particularly for winning “scholarships” (passes in the 11+ exam which won you a place at a secondary school), and probably this was a factor. Anyhow, in September 1926 when I was a “rising five”, we all three went to Nether Green. 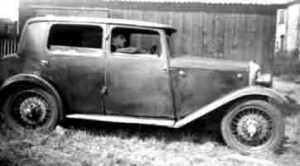 Hardly anyone we knew had a car in 1925. Dad’s colleague Percy Roberts had a 1927 Singer and then a 1931 Riley in which we got an occasional ride. But even when Watt Lane’s hundred or so houses had all been built in the late 30s there were only half a dozen cars – Willie and I knew the registration numbers of them all. Cars were somehow the gateway to excitement and adventure.

We had very little money and Willie would send me down to Bob Davidson’s garage with a bottle for a pint of petrol! Back home in Sheffield we often went for a walk, as mentioned above – perhaps all five of us, or perhaps just Willie and me, and in the latter case we certainly went from Crosspool along the Manchester Road, the A57, where you were most likely to see cars, Model T Fords, Morrises Cowleys and the occasional Bentley or Lagonda.

In 1933, when Willie was 16 he bought a motorbike, a 1927 Levis 250cc for 50/-. Mum and dad had not been consulted and they thought it was dangerous, so he never taxed and insured it, but we rode it round the fields at the back, where new houses were being built along Dransfield Road. Despite the complaints of the neighbours it was a lot of fun.

I learned some useless things at KES – for instance how to translate into Greek “The King’s black lions have toothache in the winter.” But I learned useful things too. One very important one was the idea of logical proof, which I met first in geometry – I felt much more convinced about the square on the hypotenuse than about the existence of God.

Another important lesson was that gambling was a mug’s game. We played pontoon a good deal during breaks, or behind our desks during lessons. There was a 2d. limit, and a good deal of credit was acceptable, but there came a time when I owed some enormous sum, 1/6 or so, and had no way to pay it off. Many of my friends seemed to have far more pocket money than me, so I decided that those with the longest purse could take most risks and were bound to win in the long run.

Another useful thing was a basic knowledge of woodwork – I learned how to sharpen a chisel or make a mortice and tenon joint – skills which lasted rather longer than the bookstand and clock case I produced at school.

I also developed at KES a taste for poetry which probably went back to nursery rhymes. I only needed two or three readings of a piece of verse I enjoyed for it to stick in my memory – much of it is still there. English classes gave me a taster of the leading poets from Chaucer to Housman, and an appetite for more which has stayed with me.

Thanks to Joe’s son Mike for giving permission for us to publish these extracts of his father’s memoir on Crosspool News. You can read the full version (PDF, 112KB) on www.lexically.net.