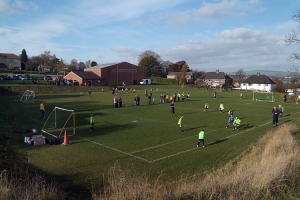 An armed response unit was called out to Crosspool and District Youth Sports Trust (CDYST) on Coldwell Lane today.

Much to the annoyance of its trustees and most people using the CDYST playing field on Coldwell Lane, the anti-social behaviour of a few has led to it being treated as a rubbish tip.

Car wheels, broken sledges, parts of bikes, dozens of empty bottles & drinks cans, used barbecues and takeaway cartons and, in particular and most disgusting, bagged and unbagged dog waste have all been dumped there recently.

This reached a peak today when the CDYST cleaner found a suspicious item under the bushes by the car park while litter-picking.

Since it appeared to be some sort of grenade with its pin missing, he contacted the police and, sensibly, kept those using the sports hall and local households away from the object and indoors out of any danger.

On arrival the police decided that they needed to call in the local armed response unit. They then inspected the device, decided that it was a spent smoke grenade, and removed it for safe disposal.

The whole incident was highly disruptive, and will be a further drain on our council tax.

The trustees again appeal to everyone using CDYST premises to please take their rubbish home.