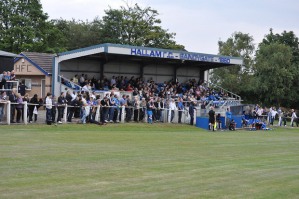 The Countrymen return to Sandygate on 20 September

Hallam FC have started the new season in the Baris Northern Counties East Football League Division One, following relegation in May.

They kicked off with a 1-0 defeat at local rivals Handsworth and then last night lost 2-0 to  Hemsworth Miners Welfare.

The Countrymen’s first match at Sandygate isn’t until 20 September when they host Appleby Frodingham in the Wilkinson Sword Trophy first round. They then play Appleby again on 1 October in the league.

Earlier this month, The Star reported that Hallam chairman and former premiership referee Uriah Rennie has been trying to keep the peace behind the scenes where there has been a rumpus over voting rights and money.